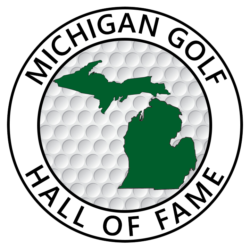 The MGHOF is a heralded collection of portraits, plaques and memorabilia that commemorate the finest players and contributors to golf in our state, including Walter Hagen, Chuck Kocsis, Ben Davis and Shirley Spork and more contemporary notables Dave and Mike Hill, Dan Pohl, Meg Mallon and Kelly Robbins.

The Hall of Fame is administered by the Michigan Golf Hall of Fame Committee, which is funded through the non-profit Michigan Golf Foundation (501(c) (3) since 1996) and includes 18 members representing state golf associations and media outlets.

Michigan Golf Hall of Fame founder Ken Janke, with the support of Indianwood Golf & Country Club owner Stan Aldridge, started the Hall in 1982, and the first class elected included the legendary showman Hagen, Michigan’s own version of Bobby Jones in Kocsis and the longtime Oakland Hills Country Club pro Watrous, who played on the first two Ryder Cup Teams for the United States.

The Hall of Fame Committee conducts the election of members to the Hall of Fame. It is an honor bestowed upon individuals who have contributed greatly to the game in our state and beyond while demonstrating leadership, professionalism, character and the highest standards of conduct.

To be elected to the Michigan Golf Hall of Fame a nominee must be at least 45-years-old and have lived in Michigan for at least 5 years.

Make a Donation to support the cause